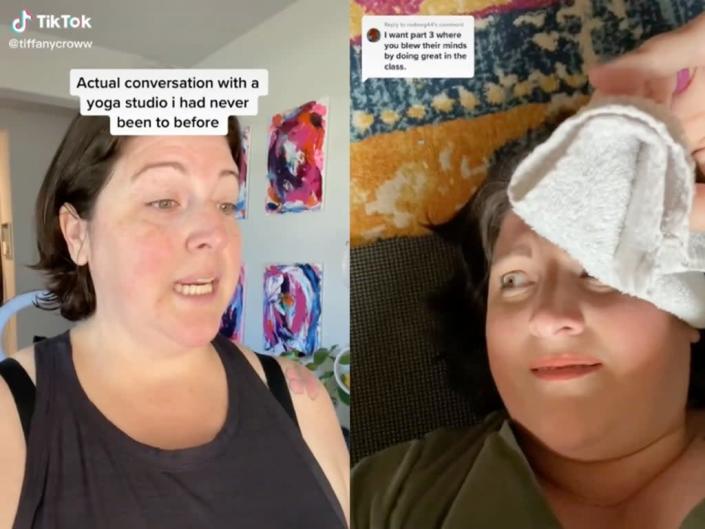 A yoga instructor has shared her experience being body-shamed while trying to attend an advanced class at a yoga studio.

Tiffany Crociani, who goes by the username @tiffanycroww on TikTok, recounted the interaction that she recently had at a yoga studio in a video posted to the app last week.

In the video, Crociani, who is a yoga teacher and who has been practising yoga for more than 17 years, reenacted an “actual conversation” that took place between herself and the receptionist at a yoga studio she had never been to before.

In the clip, Crociani began by recalling how she’d asked to check in for the yoga class upon her arrival at the studio, at which point she was asked whether she realised “this was a more advanced class”.

In response, the yoga teacher said she told the front desk receptionist that that was “actually why” she was taking the class, before informing her that she has been practising yoga for more than 17 years and teaches it herself.

Despite her yoga experience, Crociani claimed the receptionist then proceeded to look her up and down, before telling her: “We just don’t see very many people with a larger body like yours, so just keep in mind that, if it gets too hard, you can always rest in child’s pose.”

According to Crociani, the comment prompted her to ask the receptionist whether she was the yoga teacher, to which the employee said that they were just “checking people in and making sure that we have the right fit”.

After Crociani confirmed that she had been checked in for the advanced yoga class, she said the receptionist then asked her again if she was sure she wanted “to take this class, and not the easier class in an hour”.

“Yes I would like to take this class, not the easier class in an hour,” Crociani told the receptionist, at which point the receptionist asked her to “double-check with the yoga teacher over there, because she might think that this class is too difficult for you”.

In the caption of the video, which has been viewed more than 4.4m times, Crociani added: “Not sure why this is still happening.”

The video has since gone viral, where it has sparked an outpouring of outraged comments.

“That’s infuriating! The best thing about yoga is that it’s accessible for all body types, and who is she to judge your level without knowing you?” one person asked, while another said: “This makes my blood boil. I’m so sorry that this was said to you.”

“Which part of ‘I’m a yoga teacher with 17 years experience’ is so hard to grasp,” someone else commented. One viewer also noted that “the hate against heavy people is crazy”.

In a follow-up video, Crociani then shared the exchange that occurred when she approached the yoga studio’s instructor.

According to Crociani, she told the instructor that it appeared that the receptionist was “implying that [her] body was a little bit bigger than what she normally sees in this class and she was concerned”.

In response, Crociani said the instructor told her: “She is correct, you do have a larger body than what we normally see in this class, and this class is a little bit more of a higher intensity. Did she tell you about child’s pose?”

“So maybe you haven’t put on the mat as many hours as some of the other students is what I’m saying,” the teacher continued, according to Crociani.

The comment prompted Crociani to ask whether she would be okay to take the class, and whether there were any more “hoops [she] needed to jump through,” at which point she said the yoga instructor told her they weren’t trying to make it difficult for her, they were just trying to “make sure [she] was in the right class”.

“I feel like I am in the right class, and it’s really frustrating when a larger person comes into a yoga studio and they’re met with all of this red tape like: ‘Your body is too big, we’re concerned for you,’” the TikToker said she replied. “I know my body better than anybody else, so it’s just kind of a weird statement for you to assume that I can’t do a yoga practise just because of the shape of my body.”

According to Crociani, the conversation ended with the instructor asking that they “start over,” and encouraging her to stay for the class.

In a third TikTok, Crociani recounted the interaction that occurred between herself and the instructor when the class was nearly over, with the TikToker revealing that the teacher approached her while she was in Savasana, the resting pose at the end of most yoga classes, to tell her how well she’d done and invite her to come back anytime.

After the class ended, at which point Crociani said the instructor asked her what she thought, the TikToker said that she informed the studio’s teacher that the end was a “little weird,” as she’d never had someone approach her while she was in Savasana.

In response, Crociani said that the instructor told her: “Oh I just wanted you to feel good about yourself and your body because we had that conversation earlier.”

According to Crociani, the instructor then told her she had been impressed that she’d been able to do all of the yoga poses, before telling her that she has some “great strength and flexibility” and “obviously have a great personal practise”.

Crociani said she told the instructor she probably wouldn’t return to the studio, before encouraging the yoga teacher to “not say anything” to “any other fat person that walks in here, or larger-bodied person”.

“Treat them exactly the same as you would anybody else, because they deserve that,” Crociani continued, to which she said the yoga teacher acknowledged that “that makes sense”.

Crociani then revealed that the experience ended with the instructor offering her free passes so she could return, an offer which she said she declined.

“Overcompensating at the end in the worst way,” she captioned the video.

In addition to angry responses on Crociani’s behalf, the videos also prompted viewers who have experienced similar encounters to share their own stories of body-shaming or discrimination in exercise studios.

“As a person that is 200-plus pounds, and professionally/competitively danced for 20 years, I get this all the time in yoga classes,” one person commented.

Another said: “Exact thing happened to me! I was in the zone of a vinyasa flow and the teacher interrupted me with a tap on the back to say I could always do child’s pose.”

Someone else said Crociani’s experience was “one of the reasons” why they “practise at home now”. “The fact that this is still going on in studios is troubling,” they added.

The videos also prompted praise for Crociani’s handling of the situation, with one viewer telling her that they were proud of her for “keeping calm”.

“I wouldn’t be able to handle anyone around me or myself being treated like this,” they wrote. “Hopefully it made an impact on them.”

While reflecting on the experience while speaking to BuzzFeed, Crociani claimed that size discrimination happens frequently at yoga studios, and that she just wants people to know “that people of all sizes are capable”.