What Will It Take to Get More Black Men Into Yoga? 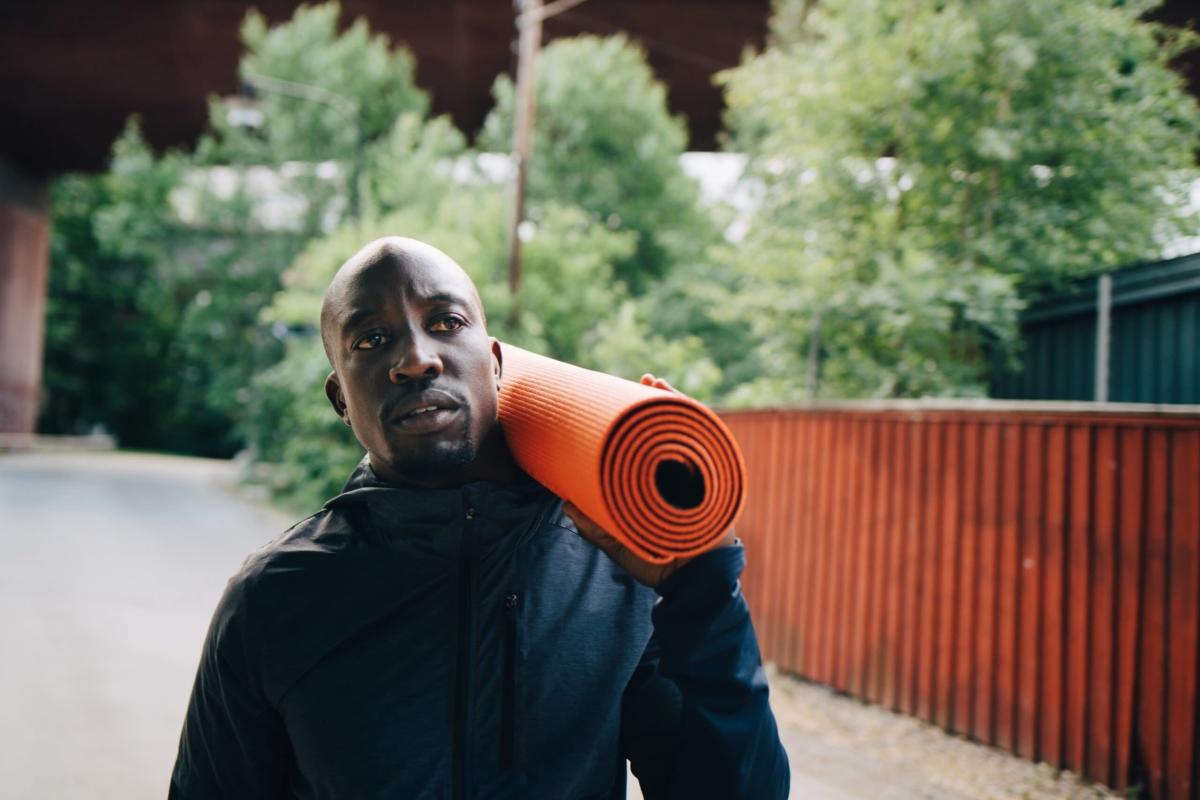 This article originally appeared on Yoga_Journal

Here’s something you don’t see often: A brother with a yoga mat. But that’s starting to change. Black men across the country have started adding yoga to their wellness regime for its physical and mental health benefits.

While the overall number of Black yoga practitioners has grown exponentially in recent years, most are women. (That’s consistent with yoga practice in general.) And that means that walking into a yoga studio can still be unsettling for a Black man. That’s why many are seeking out and creating yoga collectives where being Black and male isn’t the exception–it’s expected.

How yoga can benefit Black men

Studies have shown that yoga can reduce stress and address factors that contribute to illnesses that have plagued the Black community for generations. This is especially important for Black men, who are statistically more likely to die from cardiovascular disease, diabetes, and other chronic diseases than their White counterparts. Yoga is also proven to positively impact mental health. According to data from the National Institute on Minority Health and Health Disparities, Black people were 20 percent more likely to report having serious psychological distress than White people, yet they were less likely to seek professional mental health care. Not the mention that Black people, and Black men in particular, are often dealing with unacknowledged and unhealed race-based trauma.

Yoga groups for Black men are quickly becoming oases; places men can go to let off some steam, feel vulnerable, and not have to deal with the unwarranted stress that comes with being a Black man in America.

Take The Healing Chicago for example. Andrew Smith and Tristan Lewis started the organization to help Black and Brown men deal with the traumas of 2020–the pandemic, political upheaval, racial attacks, and the extrajudicial killings of Black men and women. What started as a weekly yoga session caught on; now Smith and Williams run a nonprofit that enables them to offer classes and other events regularly.

The “othering” of Black men in yoga spaces

“Every day of my life coming up, before going to school, my dad would be in the living room doing yoga,” says Changa Bell, founder of the Black Male Yoga Initiative (BMYI) based in Baltimore. His father inspired him to become a certified yoga instructor and life coach, and he started BMYI in 2015 as an effort to build awareness about the benefits of the practice for the Black community. Today, the organization has evolved to include a yoga teacher training program designed to encourage more men to become registered instructors.

But even with all his experience, Bell says he sometimes still feels uncomfortable in yoga spaces. As a Black man, he often feels judged as soon as he walks in the door.

“I didn’t like the pandering and the comments like, ‘Oh my God, you’re good…you know how to do this,'” he says. It chafes to have people assume he doesn’t know the practice-and then be surprised when he does. “To have them act like I was the anomaly made me shift my focus.” Now he not only works to introduce yoga to Black men, but also “to make other people know that people of color started yoga.”

Experiencing even seemingly small microagressions–being pigeonholed, overlooked, insulted, or ignored–can take a toll people of color. And for many Black men, their experiences in yoga spaces are “a microcosm of what they are dealing with out in the world,” says Sherri Doucette, founder of Litehouse Wellness, which offers “Broga” (Yoga for Brothers) to men in Dallas. She says practicing in a space where you’re the “only one” can be othering. “[A yoga class] is supposed to be a place of healing, a place where [you] can exhale,” she says. As a female instructor, she makes sure that everything about her classes caters to Black men–from the music to the messages that are written on the walls.

“There’s a unique energy that happens when Black boys and men practice together,” says Danny Fluker Jr., a yoga instructor based in Atlanta. Fluker is the founder of Black Boys OM (BBO), a grassroots organization that offers free yoga classes to men and boys and has connected more than 300 yoga practitioners in the U.S., the U.K., the Caribbean, and Africa.

Fluker came up with the idea for BBO after attending a yoga class for Black boys at a private school in Washington, D.C. Seeing how much the participants enjoyed the experience inspired him to share the ancient practice of yoga with others in his community. It didn’t take long for him to realize he had started something special–something that was bigger than yoga.

“[What] makes these practices special is that everyone practicing with you taps into the awareness that we all share similar embodiment and life experiences as Black males,” says Fluker. “We are practicing and breathing together in familiarity.”

And that desire to feel that sense of connectedness and belonging resonates with many Black men. “There’s a sense of ownership. A sense of welcoming and belonging,” Doucette says. “And that’s a fundamental need of every human being–to just feel like you belong.”

It’s a need that is often overlooked in Black men, who may feel pressure to put on a facade of toughness, and who are often targeted for “living while Black.” Smith and Lewis from the Healing Chicaog go a step further, saying they want to “change the narrative around male vulnerability” and “normalize the narrative around healing as men, so that we can elevate ourselves and others in society.”

Offering a space for men to heal is Doucette’s goal at Litehouse, an organization she founded to honor her husband who died from cancer at the age of 44. While her goal was to create a community of men who are engaged in their own well-being, the benefits extend far beyond the individual. Doucette says several regulars have told her that yoga has helped them improve their relationships with their children, partners, and colleagues.

Will yoga classes ever reach the popularity of other male bonding activities, like getting together to watch the Super Bowl or the All-Star Game? Maybe not. But with communities like these popping up across the country, it’s clear that yoga for brothers is here to stay.

For exclusive access to all of our fitness, gear, adventure, and travel stories, plus discounts on trips, events, and gear, sign up for Outside+ today.