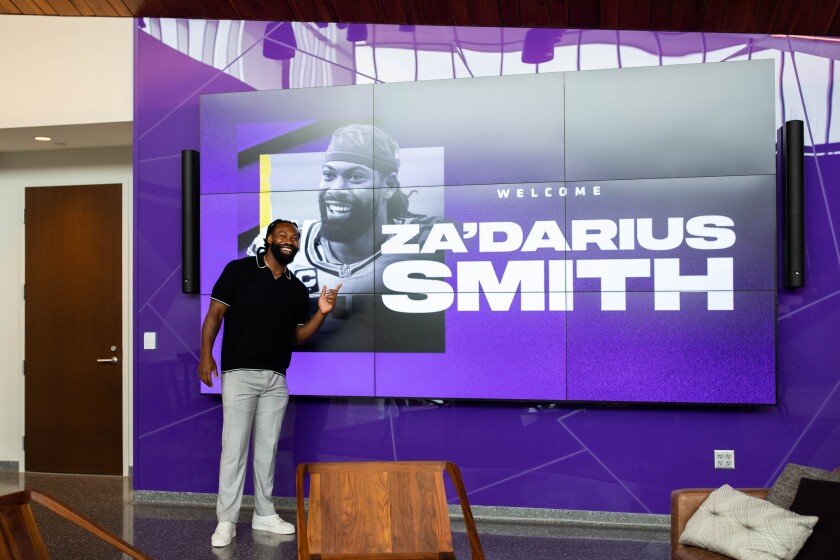 The two Vikings edge rushers first struck up a friendship at the Pro Bowl in Orlando, Fla., in January 2020, when Hunter was with Minnesota and Smith with Green Bay. Smith signed with the Vikings as a free agent in March, and he has been hanging out with Hunter plenty since offseason drills began in April.

On Tuesday’s second day of organized team activities, the two jokingly threw passes back and forth for several minutes at the start before they settled down to more serious business.

“The first time I met him (at the Pro Bowl), he was a cool, young, good overall character and all that stuff,’ Hunter said. “He came here, I was excited about it. He texted me saying he was coming here, and we started developing a bond.”

Hunter said it’s “wonderful” to now be Smith’s teammate. And the two hope to recreate the old motto of the Purple People Eaters to “meet at the quarterback.”

“I say one of the best in the NFL,’’ Smith said of the pass-rushing duo the Vikings now have. “But you know, it’s too early. We’re just gonna keep working and getting better at our craft, and you’ll see the results here in the season.”

Smith talked about his health after he signed, saying he’s fully recovered. But Hunter didn’t discuss his latest injury until Tuesday, when he spoke to the media for the first time since Sept. 29.

Hunter missed all of 2020 due to a neck injury. He didn’t play in the final 10 games last season because of surgery to repair a torn pectoral muscle suffered Oct. 31 against Dallas.

“I feel pretty good,’’ said Hunter, entering his eighth season. “Last year’s injury wasn’t as significant as the year before, but it was a three-month recovery. Had we made it to the playoffs, iI’s possibly would have been able to come back. … It’s just good to be back with the guys. …It kind of hurts just watching people play.’’

Hunter said it was “around February or March” when he returned to his regular workout routine.

“The biggest thing was having like the right people around me, just motivating me and keeping me in the right mindset,’’ he said of his recovery.

Coming off the injury, there was seemingly some uncertainty on what the Vikings might do when they had until March 19 to decide whether to pick up an $18 million roster bonus on Hunter’s contract. They did pick it up, and converted it into a signing bonus over four years, lowering Hunter’s cap number from $25.838 million to $12.338 million for 2021.

“I wasn’t really worried about (the bonus),’’ said Hunter, who said new general manager Kwesi Adofo-Mensah reached out to him right after he was hired in January and new head coach Kevin O’Connell reached out right after his February hiring. “My biggest thing was getting through my rehab and coming back playing football.’’

Hunter said he let his agent, Zeke Sandhu, take care of discussions about the bonus. And Hunter, whose contract runs through 2023, plans to do the same regarding extension talks.

For now, Hunter’s role will change in new defensive coordinator Ed Donatell’s 3-4 scheme. After being a defensive end in the 4-3, he said he’ll play both defensive end and outside linebacker but will stand up much more than before.

“I used to stand up when I first got here (in 2015),’’ said Hunter, who noted that the Vikings played some 3-4 alignments in Week 2 last year at Arizona. “So I know how to do that. Basically, just integrating my rush angles and my eyes and all that stuff.”

“Everybody has a smile on their face every time they come in,’’ Hunter said.

This story was written by one of our partner news agencies. Forum Communications Company uses content from agencies such as Reuters, Kaiser Health News, Tribune News Service and others to provide a wider range of news to our readers. Learn more about the news services FCC uses here.