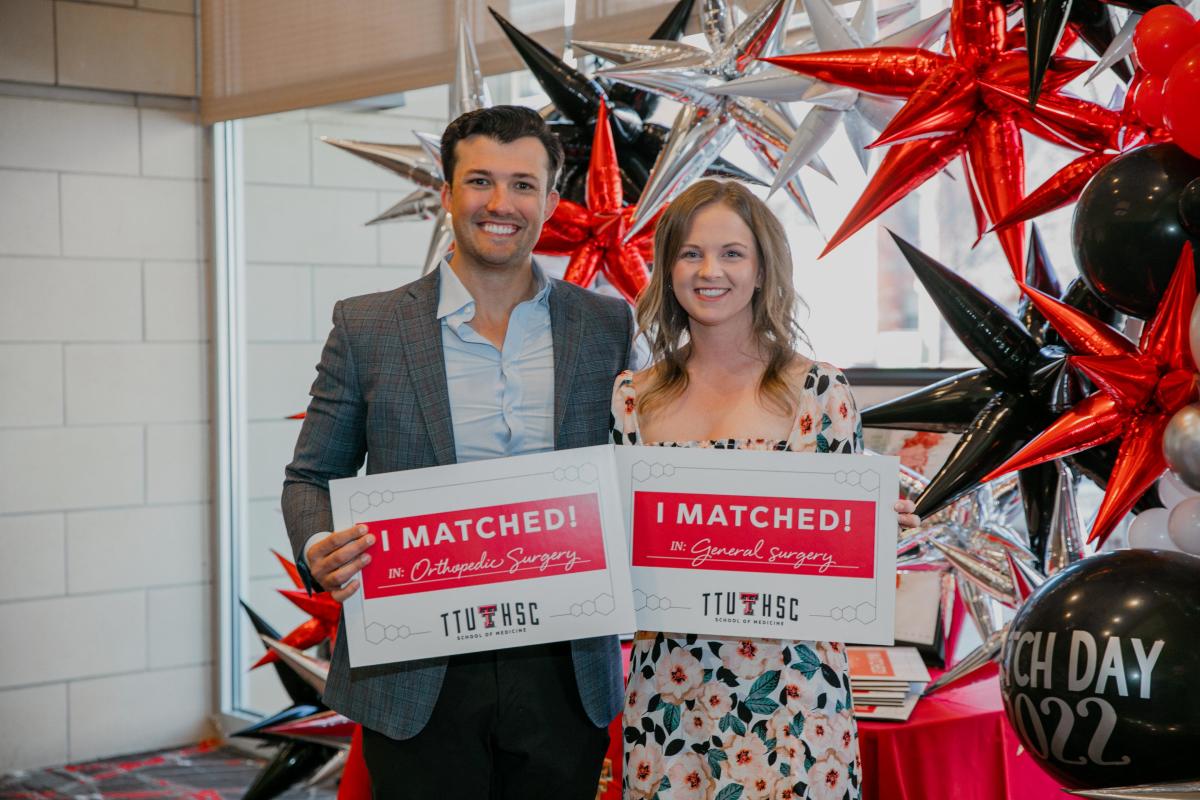 After years of tireless study in Lubbock, fourth-year medical students at Texas Tech University Health Sciences Center School of Medicine learned in dramatic fashion where they will be spending the next three to seven years of their life at a Match Day event Friday.

Students across the United States open their match letters simultaneously on Match Day, explained Dr. Steven L. Berk, Dean of the School of Medicine at TTUHSC. The letters tell where the students will serve their residency, which could be described as a multi-year internship where freshly graduated physicians hone their specialty.

Many of the students will become residents at some of the most prestigious hospitals in the country, while others will stay close to home. In total 177 medical students matched on Friday in Lubbock.

Since October, students have been interviewing for different residency programs in their field of interest (via Zoom, thanks to COVID-19). The students then rank the programs they would like to attend while the programs rank the potential residents, Berk said. Then an algorithm matches all students nationally with all of the different programs.

Two of the students who learned their match on Friday are Caroline Freedle and Patrick Bettiol. The pair, who can only be described as “couple goals,” are both heading to Oklahoma City to complete their residency at the University of Oklahoma College of Medicine. Freedle will specialize in general surgery and Bettiol in orthopedic surgery.

Freedle, from the San Antonio area, and Bettiol, from upstate New York, met during their first semester in med school. The icebreaker? Caroline’s broken finger.

“I asked her what was wrong with her finger, and she was like ‘Is this guy serious? Why is he talking to me?’” Bettiol said.

Freedle chimed in, “I was here to get my medical degree and I wasn’t too concerned about boys, but he stuck around and later that year we started dating. As we kind of evolved in our relationship, we realized that it was more than just a fling, and it was something that we were very intentionally pursuing.

“That started some kind of serious conversations about how do we align our goals to both succeed in what we want to do and then also stay together,” she said. “Our profession is part of our life, but things outside of medicine matter as well.”

“We just had to communicate a lot and be really intentional about supporting each other and what we wanted to do and chasing that 110 percent,” Bettiol added. “We said we wanted to match together, and that’s what we got, so we’re super excited.”

Nick Garza learned that he would be spending another year in Lubbock before also heading to OKC as a diagnostic radiology resident at Integris Health. “I’m thrilled,” he said, noting that he matched with his first choice as well.

Garza, who recently celebrated his 40th birthday, spent time as a musician and entrepreneur before deciding to pursue medicine. Match Day might have been extra sweet for Garza, whose path through med school has been far from easy.

Prior to moving his family to Lubbock, Garza was finishing up at the University of Texas at Austin when his wife Melissa started having concerning physical symptoms.

“My last semester there, she was diagnosed with stage II-B endocervical cancer,” Garza said. “But she wanted me to continue my pursuit of becoming a doctor. It was something we had both worked toward for several years prior to that.”

Knowing that Melissa would want him to press on, Garza kept going with the help of friends and family. Now a single dad to his young daughter Caitlyn, Garza had a plethora of challenges to navigate.

“Medical school is challenging on its own. Most of us study quite a bit,” Garza said. “Being a single dad, I had to balance that. I had a lot of help from the school. They were very supportive of me. Faculty was helpful and Dr. Berk was very supportive of me continuing.”

Indeed, Berk is supportive of all the future physicians that matched on Friday. Just before the students opened their envelopes, Berk gave them a few words of encouragement as they prepare to move to the next chapter.

“I hope you get your top choice, and I think many of you did. In fact, many of you matched in very prestigious places,” Berk said. “But please remember, where you did match is a place that wanted you, and perhaps is the place that you wind up in for a reason. It’s definitely a place where you can be successful and actively start to be the physician you have worked hard to become.”