TSA won’t search for cannabis, but you can still get in trouble. We asked airport security how to bring medical marijuana on a plane 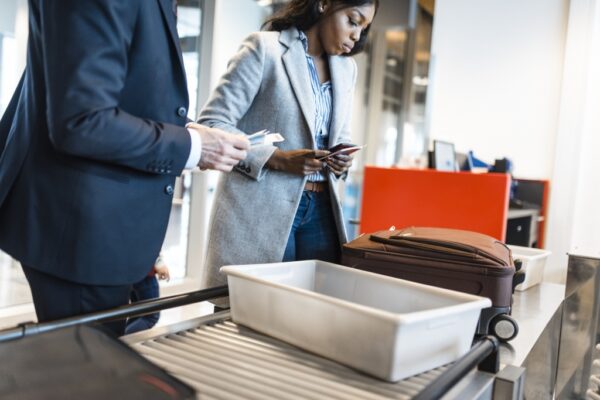 Two years since the start of the pandemic, travel is finally coming back. But a lot has changed in the age of COVID-19.

Staying at home allowed many people more time to focus on their health and well-being. As part of that, many patients began using medical marijuana. By mid-2020, it was estimated that 3.6 million people used medical marijuana in the United States.

Using cannabis when everyone was staying at home was easy. But using it out-of-state? That’s where things get dicey. If you’re navigating travel with medical marijuana for the first time, you might be wondering, how do I bring medical marijuana with me on a plane?

Don’t worry—we’ve got you covered.

RELATED: What THC to CBD ratio is right for me? We asked health experts how to choose the right cannabis product

We spoke with the Transportation Security Administration (TSA) on how Americans can travel with medical marijuana in toe. Here’s what they told us:

Is it legal to bring medical marijuana on a plane?

Here’s how TSA spokesperson Lorie Dankers broke it down for us: The TSA operates under federal law. As such, they will report any substances found that are not legal under federal law if found.

Since cannabis is not yet legal in the United States, the TSA is obligated to report any cannabis products found to law enforcement.

RELATED: My dog ate weed. What should I do? We asked veterinarians how cannabis affects canines

There are a lot of different ways this could play out. From here, you could simply be stuck at security, waiting for law enforcement, only to have them throw out the substance and send you on your way. There have even been some reports of the TSA throwing out the product and sending passengers along with a warning without ever calling law enforcement, but that’s more likely to happen in a state where cannabis is legal.

Federal criminal prosecution of up to five years and a $250,000 fine for transporting an illegal drug across state lines. *Gulp.*

Dankers says, “TSA’s response to the discovery of marijuana is the same in every state and at every airport–regardless of whether marijuana has been or is going to be legalized. This also covers medical marijuana.”

There’s one slight exception to this: Albany International Airport and several other airports in New York State announced last year that their police are no longer issuing tickets or making arrests for less than three ounces of cannabis found.

But here’s the longer answer.

RELATED: They say marijuana is stronger these days. But exactly how much stronger is today’s cannabis?

While traditional cannabis may still be federally illegal, cannabis products containing less than 0.3% THC (i.e. hemp/CBD products) were legalized under the U.S. Farm Bill in 2018.

So while you may not want to bring a joint with you on a plane, you won’t risk federal punishment by bringing CBD oil or Delta-8 products in your bag. Just be sure your airline doesn’t have any rules prohibiting CBD, Delta-8, or hemp products on board.

Dankers added that FDA-approved cannabis-derived or cannabis-related drug products, such as Epidiolex, can also be legally transported across state lines.

Also, according to Dankers, the TSA is not looking for your weed. No offense, but they have more important things to look for.

“TSA’s focus is on terrorism and security threats to the aircraft and its passengers,” Dankers told GreenState. “TSA’s screening procedures are focused on security and are designed to detect potential threats to aviation and passengers.”

Essentially, the TSA isn’t going to actively look for your stash in your carry-on or checked baggage—it’s just not what they’re concerned about. So, if you can get your stash past airport security, you’re probably in the clear.

Of course, you could still be charged with possession if you’re flying to a state where medical marijuana is illegal.

Bottom line: pack weed at your own risk. No bud is worth time in jail.

How should I pack medical marijuana?

We’ve already covered the dangers of bringing cannabis products containing more than 0.3% THC with you on a plane. But let’s assume you’ve decided to bring a CBD cream with you on vacation. How should you do it?

The answer is pretty straightforward: When packing cannabis-related items, don’t treat them any differently than your other belongings. If you’re bringing CBD oil or CBD cream in a carry-on bag, just be sure it’s in a 3.4-ounce container or smaller to comply with the TSA’s liquids rule.

And again, be sure your airline doesn’t have any specific guidelines for bringing cannabis-related products on the plane.

Concerned about keeping your products fresh in flight? Check out our tips for properly storing cannabis.

Should I bring anything to prove I’m bringing cannabis for medical purposes, not recreational?

Dankers said TSA is obligated to treat cannabis the same way in every airport, regardless of whether it is intended for medical or recreational use, or what the state laws are concerning medical and recreational cannabis.

That said, it can’t hurt to bring evidence of medicinal use, such as a signed recommendation for medical marijuana from your doctor and/or a medical marijuana card, which could be presented if law enforcement becomes involved at any point on your trip.

For patients who rely on medical marijuana, there’s no sugar-coating it: air travel with cannabis is difficult, if not impossible.

To play it safe, travel with CBD or other cannabis products containing less than 0.3% THC, and bring your medical marijuana card as evidence of medicinal use. You can always travel to cannabis-friendly states where you can replenish your stash on arrival.

Elissa Esher is an editor at GreenState. Her work has also appeared in The San Francisco Chronicle, The Boston Guardian, Brooklyn Paper, Religion Unplugged, and Iridescent Women. Send inquiries and tips to [email protected]

This article first appeared on GreenState, a cannabis lifestyle blog owned by Hearst.