Sell Apple on Monday Morning’s News? Here’s How I See It 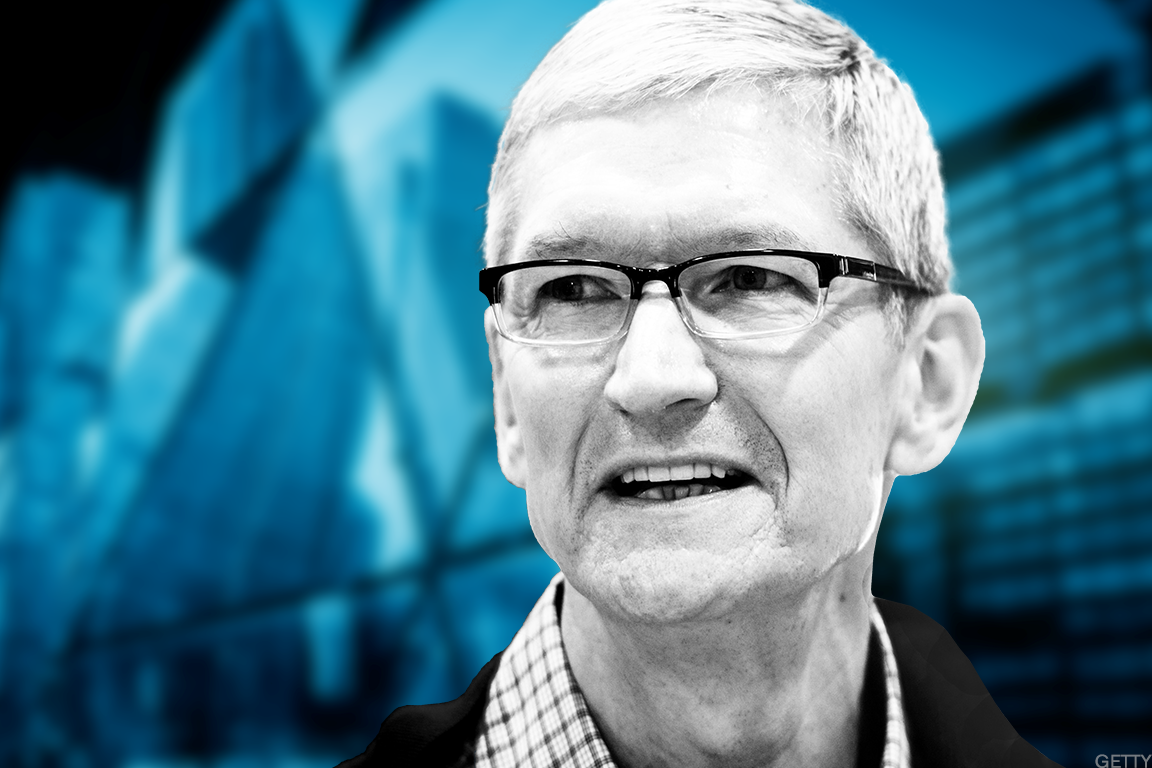 Just last week, things appeared to be moving quite swimmingly for Apple (AAPL) . Dan Ives, five star rated (by TipRanks) analyst at Wedbush was seeing “stellar” demand for Apple’s iPhone 13 around the world despite some global supply chain issues. The very next day, Cowen five star analyst Krish Sankar called iPhone SE demand “healthy”… but did note that Russia’s invasion of Ukraine and concerns over the Chinese economy could cause some issues.

That same day, Bloomberg News ran a story that Apple was supposedly working on a subscription model that would or could become the new way to own or at least have iPhones, Macs and other Apple hardware that is currently sold either for full price or on some kind of installment plan. The idea would be for a greater portion of Apple’s hardware driven revenue to be converted to a recurring revenue style that is more reliable, more predictable, and more akin to software and services than it is to hardware. Recurring revenue is also more highly valued by Wall Street.

By Sunday night, there was more good news. At the 94th Academy Awards (saw it in the news, wouldn’t be caught dead watching), where a slap would make more headlines than anything else, the Apple+ original drama CODA became the first streaming-originated “Best Picture” of the year… ever. Apple+ would upstage the more highly touted Netflix (NFLX) , which led all studios in total nominations, not to mention the rest of the streaming universe. Does this translate into increased Apple TV+ subscriptions? It can’t hurt.

News broke again on Monday morning, this time by Nikkei Asia. Nikkei Asia reports that Apple will be cutting its (just announced) iPhone SE output for the next quarter by as much as 20%, reducing production levels to 2M to 3M units. Apple is, according to the piece, also reducing orders for AirPods by more than 10M units for full year 2022. Lastly, the article reports that Apple has asked suppliers to make a “couple million” fewer iPhone 13 units than previously planned due to “seasonal demand.”

Do I trust this story? How do I know? I have seen similar stories in past quarters in regards to Apple that never showed up at reporting time. Readers may recall that back in late January, when Apple reported its quarterly numbers, CEO Tim Cook stated that he was seeing “strong demand across the iPhone 13 family.” Kind of makes one cautious, both ways.

I see three five star rated sell-side analysts that have come out and opined either last night or this morning. The production cut story does not seem to be as “front and center” as I had expected. Dan Ives stated ahead of the Academy Awards that should Apple win best picture, “it would catalyze more A+ talent coming to Apple first and could propel Cupertino’s content efforts by multiples over the coming years with a major paid subscriber boost.” Ives has a “buy” rating on AAPL with a $200 price target.

Morgan Stanley’s Katy Huberty stated, “We are confident that the average Apple user’s willingness to pay for access to their Apple devices is meaningfully higher than $1/day or $30/month.” Huberty sees any hardware subscription plan as likely having multiple pricing tiers, similar to Apple One that bundles Apple services. Huberty rates AAPL as a “buy” with a $210 target price.

Lastly, JP Morgan’s Samik Chatterjee says that his firm’s iPhone SE 3 availability tracking suggests that lead times have moderated in almost all geographies. with the exception of China, where store pick-up is not available and delivery times have expanded. Chatterjee sees early data points as more indicative of limiting potential upside to his prior volume estimates for 30M iPhone SE 3s. Cahtterjee maintains his “buy equivalent” rating of “overweight” on AAPL with a target price of $210.

I touched on Apple last Thursday in my Market Recon column. It has been a little while since I made Apple the feature of any article. Until today. I saw AAPL trading about 1.5% lower ahead of the New York open. It was worse overnight. I think that these production cuts do not exactly come out of the blue to the same degree that the optimistic outlook regarding demand did last week. Investors expected some Covid and economic related problems in China. I think that investors expected the sale of smartphones and other hardware to tail off significantly in eastern Europe as Ukrainians probably are not browsing their local Apple Store these days, and the loss of Russian sales is something that U.S. multinational corporations are going to have to get used to.

It comes down to this… does the positive impact of making hardware subscribable outweigh the negative impacts of slowed activity in China and war in Europe? The negatives have the potential to be temporary. Subscribable hardware will likely result in more hardware and higher end hardware moving more briskly once supplies are not an issue. I would think. Do I sell AAPL on this morning’s news? Maybe if one is a trader. I do not. When it comes to AAPL, I am an investor. Do I add? Probably not up here. The stock comes into Monday on a nine day winning streak and some profit taking on what looks to be a negative headline would be expected. 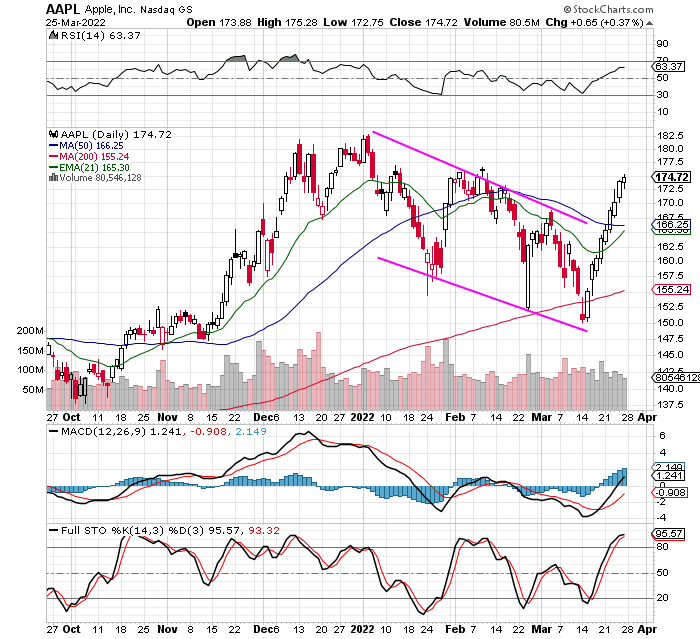 Readers will see that the nine day run has put the Full Stochastics Oscillator as well as the daily MACD into technically extended territory, while Relative Strength has come close enough. One will see the downward sloping channel in place since the start of the year that produced the upside break in place since mid-March. 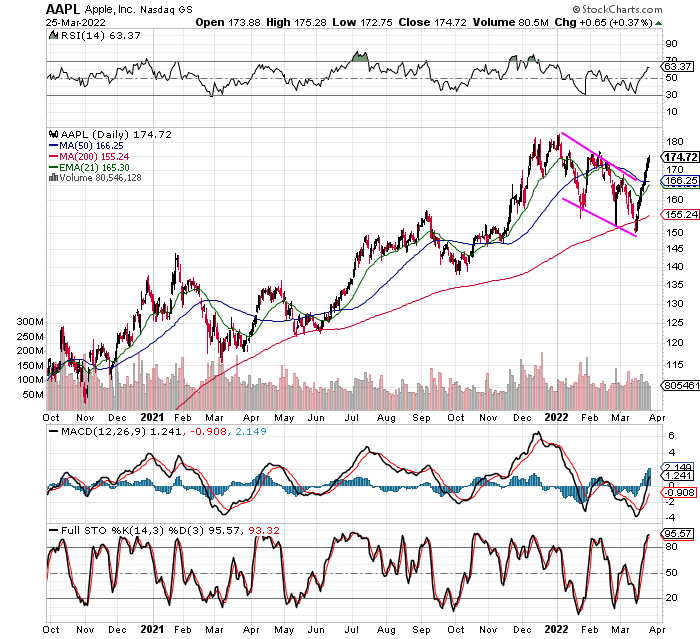 All of a sudden, two and a half months doesn’t seem so long, and our downward sloping channel now looks like a bull flag attached to a long upward move. This “bull flag” by the way, is a bullish pattern of continuance. What that means is that the longer upward sloping trend is still intact.

(Apple is a holding in the Action Alerts PLUS member club. Want to be alerted before AAP buys or sells AAPL? Learn more now.)

Get an email alert each time I write an article for Real Money. Click the “+Follow” next to my byline to this article.