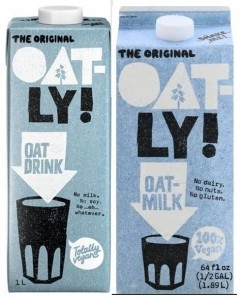 The FDA – which had previously announced its intention to release draft guidance on plant-based milk labeling by the end of June, told us: “The FDA intends to release a draft guidance expected to be entitled ‘Labeling of Plant-Based Milk Alternatives and Voluntary Nutrient Statements: Draft Guidance for Industry’ in the near future. The draft guidance is currently under review by OMB​ [which has a standard review time of 90 days].”

Asked when the FDA would define ‘healthy,’ the agency said: “FDA has drafted a proposed rule and the rule is being reviewed by OMB.​” Separately, two studies – outlined here​ –​ into a symbol that firms may use on products that meet the ‘healthy’ definition will be conducted “in the near future​,” added the agency.

While terms such as ‘soymilk’ and ‘oatmilk’ are prohibited in the EU (where Oatly is an Oat Drink), they are widely used in the US (where Oatly is Oat Milk). And the FDA – say critics – has fluctuated unhelpfully on the issue of whether such terms mislead shoppers or violate federal standards of identity,​​​ which limit the term ‘milk’ to the “lacteal secretions​​” of cows.

For example, the FDA queried the term ‘soy milk’ in warning letters to a couple of manufacturers in 2008 and 2012, but thereafter maintained radio silence on the topic until then-FDA commissioner Dr Scott Gottlieb re-ignited the debate in mid-2018​​, ​​telling delegates at a conference in Washington that, “We have a standard of identity for milk ​​and I intend to enforce that… an almond doesn’t lactate.”​

Gottlieb also noted, however, that there could be First Amendment issues to address, and that the FDA could face legal challenges by suddenly banning terms such as ‘almondmilk,’ having tacitly endorsed such terminology on food labels for years.

A request for information issued in September 2018​​​ to solicit feedback on the issue generated a dizzying number of comments, with milk producers arguing that the word ‘milk,’ even with the term ‘almond’ before it, falsely implies nutritional equivalence to dairy; while The Good Food Institute and the Plant Based Foods Association argue that there is no evidence that consumers are confused or that they assume oatmilk or almondmilk should precisely match the nutrition of dairy milk.

The GFI told FoodNavigator-USA: “GFI petitioned FDA in 2017​​​ for a commonsense regulation to make clear that compound names like ‘oat milk’ and ‘almond milk’ are lawful. Now would be a great time for the FDA to grant that petition and put this issue to bed once and for all.”​

FDA standards of identity ​​​​define the unqualified term ‘milk’ as the ‘lacteal secretion, practically free from colostrum, obtained by the complete milking of one or more healthy cows.’​​

According to plant-based brands, who typically use a modifier (eg. almond-milk) and additional qualifiers (eg. dairy-free, plant-based, non-dairy) to make it clear they are not selling dairy milk​​​, such standards of identity were designed to address fraud and economic adulteration, not to prevent plant-based alternatives from referring to standardized terms (eg. milk) in their marketing altogether.​

Courts handling false advertising cases over plant ‘milks’ have tended to agree, arguing that​​​​​ the federal standard of identity for milk does not categorically preclude a company from giving food products names that include ​​​​the word ‘milk.’

For example, in a case vs Trader Joe’s​​​​,​​​​ judge Vince Chhabria noted that the word ‘soy’ before ‘milk’ cleared up any confusion as to the contents of the package in question: “Trader Joe’s has not, by calling its products ‘soymilk,’ attempted to pass off those products as the food that the FDA has standardized (that is, milk).”​​​​

As to the question of nutritional equivalency, Stephen Wilson, the judge handling a false advertising case vs Blue Diamond Growers (Almond Breeze) in California, did not buy the argument​​​​​ that the word ‘milk’ came with a certain set of nutritional expectations, adding: “If the consumer is concerned about the nutritious qualities of the product, they can read the nutrition label…”​

Food labeling rules have historically permitted ‘healthy’ claims on foods with 3g or less total fat and 1g or less saturated fat per serving (excluding fish and meat), with limits on cholesterol and sodium, and minimum requirements for nutrients to encourage (vitamin A, C, calcium, iron, protein, or fiber). There are no limits on sugar – added or otherwise.

However, the FDA took a fresh look at the definition in 2016 after KIND Snacks challenged a definition of ‘healthy’ that immediately excluded products high in healthy unsaturated fats such as nuts and avocados.

This resulted in guidance​​ permitting ‘healthy’ claims on higher-fat products provided they “have a fat profile makeup of predominantly mono and polyunsaturated fats; or contain at least 10% of the Daily Value (DV) per reference amount customarily consumed (RACC) of potassium or vitamin D.”​

The FDA concurrently issued a request for information from stakeholders about use of the term healthy​​ in September 2016, ​which prompted thousands of conflicting comments​​.

Dr Marion Nestle: ‘We will end up with lots of products that meet the definition but are still junk foods or ‘better-for-you’ choices’​

Several commentators queried the value of the exercise altogether, including nonproﬁt food and nutrition education organization Oldways – best known for creating the Whole Grain stamp – which urged the FDA​​​ “not to endorse the use of the word ‘healthy’ at all, since overall diet determines health – not individual foods – and certainly not individual nutrients.​

Even the FDA’s new guidance​​​ “would​​ still result in a food like brown rice not qualifying to be labeled healthy,”​​ noted Oldways: “No matter what combination of nutrient criteria FDA might mandate as healthy, it’s inevitable that a reductionist approach will result in efforts to game the system with fortified manufactured foods, while some whole, natural foods may fail to qualify.”​​​

If the FDA has to come up a definition, it added, “Oldways recommends using it to highlight whole or minimally processed plant foods, which are especially encouraged in the 2015-2020 Dietary Guidelines for Americans ​​[including fruits, vegetables, legumes/pulses, whole grains, vegetable oils if mostly unsaturated, herbs and spices, nuts, and seeds] instead of tying use of the word ‘healthy’ to a formula of nutrients.”  ​​​

Dr Marion Nestle, Paulette Goddard Professor of Nutrition, Food Studies, and Public Health at New York University, meanwhile, told us at the time: “The problem with all of this is that the criteria are inevitably arbitrary and easy to get around. We will end up with lots of products that meet the definition but are still junk foods or ‘better-for-you’ choices.  A better-for-you junk food may still not be a good choice.”​

Bonnie Taub-Dix, RDN, creator of BetterThanDieting.com, and author of Read It Before You Eat It – Taking You from Label to Table, told FoodNavigator-USA: “Looking at an individual food and slapping an icon on there that says healthy is like expecting one instrument to play the music of an orchestra.”​

Reading through comments issued back in 2017, most stakeholders agreed that ditching the total fat threshold made sense, but disagreed over saturated fat; while cholesterol also proved contentious, with the CSPI urging the FDA to retain limits on cholesterol, while Unilever argued that “limiting intake of ​[dietary] cholesterol is no longer a concern based on current scientific evidence.”​

Perhaps the biggest bone of contention, however, was added sugar, with some industry stakeholders such as the Cranberry Institute arguing that a nutrient-packed “fruit like the cranberry, which is sweetened for palatability, should not be discounted for containing added sugar​​,” while The Academy of Nutrition and Dietetics “strongly supports updating any ‘healthy’ definition to limit added sugars.”​

Juice also emerged as another bone of contention, with the CSPI arguing that FDA should not allow ‘healthy’ claims on fruit juices,​ on the grounds that we should be encouraging consumers to eat “the healthiest form of fruit: whole fruit,” ​while the Juice Products Association begged to differ.

The FDA’s healthy probe was triggered by a row​​​ with snack bar maker KIND, which says rules requiring ‘healthy’ foods to meet the criteria for ‘low fat’ claims were outdated​​​ as they exclude high-fat foods we know to be nutritious such as nuts and avocados, but include low-fat sugary foods.

The FDA agreed​​​ to re-evaluate its conditions of use for ‘healthy’ nutrient content claims, and invited public comment ​​​on questions including: