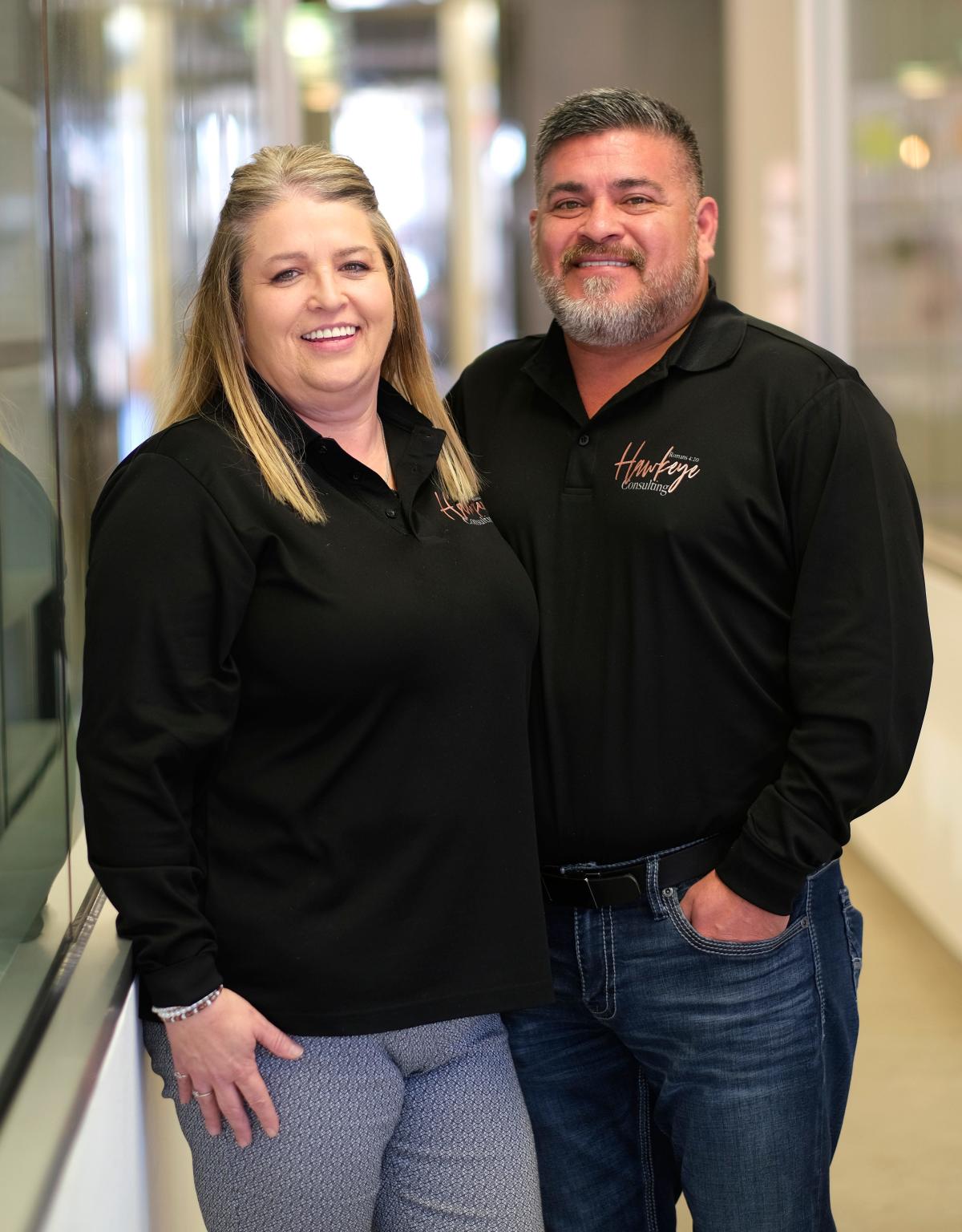 Some people may drive by the establishment numerous times, while others are emboldened enough to pull into the parking lot — only to sit in their cars.

An Oklahoma minister and his wife are helping people reluctant to visit medical marijuana dispensaries come out of the shadows.

No, the Rev. Kent Hawkins isn’t the Pot Pastor or Father Feelgood.

“We are not pot heads,” he said of himself and his wife Jennifer.

The Leedey couple said they simply know that many people, especially Christians in this Bible belt state, worry that their reputations may suffer if anyone from their faith community found out they have visited a dispensary to obtain medical cannabis.

For others, it’s not what people will say that keeps them from seeking such treatment, it’s their own inner conflict about it all or their general lack of knowledge about medical marijuana.

Kent, 52, said the allure of the health benefits eventually outweighs the stigma that often comes attached to cannabis. For those who need more help than others to overcome barriers, the Hawkinses, as founders of Hawkeye Consulting, a “Christian cannabis consulting” service, stand ready to offer advice and even a step-by-step visit to a dispensary.

Kent, an ordained Assemblies of God preacher, thinks there are people who won’t brave the door of a dispensary if they don’t have someone coming alongside them to guide them.

The husband-and-wife team are doing just that for Oklahomans, and people from at least six other states who are navigating the medical marijuana industry for healthy outcomes.

Jennifer said their unique journey started with her health problems. She said she had been diagnosed with seven autoimmune diseases and was a diabetic who had to take insulin several times a day. She had been prescribed 20 medications. She said her team of doctors eventually diagnosed her with nonalcoholic cirrhosis of the liver that was medically induced. And eventually she had open-heart surgery.

“I hit a brick wall where I had my own idea about what we should do,” she said. “I was a sick individual.”

She started doing research on plant-based therapies around the time of her recovery from open-heart surgery in 2017. She gained insight from pharmacists in Colorado, where medical marijuana had been legal since 2000 — long before Oklahoma voters passed State Question 788 in 2018, effectively making medical marijuana legal in the state.

Jennifer said with consistent, correct use of medical cannabis, she was able to get off all of her medications with the exception of one that is necessary because of her open-heart surgery.

Her medical team was shocked, to say the least.

“They did two lab draws because they thought it was a mistake,” Jennifer said.

Among the doctors who were amazed was her rheumatologist, who didn’t agree with her patient’s decision to move forward with medical marijuana.

“She hugged me,” Jennifer said. “She said ‘I’ve never turned away a patient because I have no more advice.’ She said, ‘You are well.’ … She had tears rolling down her face.”

One day a good friend asked about the glow of health that surrounded her.

“She said ‘What are you doing? People in town are talking about it,'” Jennifer said. “I said I chose cannabis over pharmaceuticals.”

The two friends decided that they would help others who might benefit in the same manner.

Kent said he remembered that part of their journey.

“They want to be blessed so they can give and bless others,” he said of his wife and her friend, who initially started helping people voluntarily.

Thou may use medical marijuana?

The Hawkinses initially had a commercial grow, where they cultivated marijuana. They have even created their own product, Hawkeye Relief, a CBD topical pain relief cream, which they launched in January.

Their efforts have evolved from the grow operation to more of a focus on providing assistance to people seeking information and assistance.

Members of Harvest Assemblies of God in Leedey, they said the ultimate mission of their consulting enterprise is to guide patients to take control of their health and healing. The Hawkinses want to educate people about medical cannabis and its healing and health benefits and leading the industry on a “road to redemption by exposing the truth.”

What is the “truth” the couple is determined to expose? Kent said it is the Biblical basis for medical marijuana usage.

“We began to do research about what the Bible said about it,” he said. “It’s pretty cut and dry when you read your Bible.”

Their research led them to four principles: ownership, stewardship, responsibility and accountability.

Ownership, Kent said, is the concept that God created everything so it is his. Stewardship is the idea that man is a steward of God’s creation.

“So we have to be responsible to use the things that God gave us, the way God gave us to use and to benefit us and be able to glorify him and good and if not, there’s an accountability on that,” he said. “If you do it the way God wanted you to do it, well then, you’re going to pay for that. If you didn’t, you’re going to pay for that also. It’s either right or wrong.”

In other words, the couple said using medical cannabis isn’t wrong because it is being used for good — the treatment of medical ailments.

“Everybody says ‘Well, marijuana is a sin.’ Absolutely everything that’s created can be a sin,” Kent said.

“So everything that has been created can be abused and it is — that’s just human nature. But there are huge benefits when you use cannabis and when you use plant-based therapies the way God intended, you can keep your faith and your values and your morality and glorify God.”

Jennifer said there are many people, including ministers from around the country and the world, who have sent them messages, encouraging them in their mission, telling them they are praying for them and believe in what they’re doing, though some can’t publicly offer such kudos.

Kent said the stigma surrounding cannabis is hypocritical in many ways.

“It’s really odd that there are people who are condemning cannabis and plant-based therapies when they’ve been taking taking opioids for 10 years and they don’t think they’re addicted,” he said.

The couple said one of the most important aspects of their consulting business is their efforts to visit dispensaries so they can better make recommendations for their clients.

The couple said they don’t bad mouth dispensaries that aren’t up to snuff; they simply don’t recommend them.

The Hawkinses said they consider how the establishment looks when you pull up to it and what products are on the shelves. They said in their opinion, a dispensary that seems to have more of the marijuana flower/plant, tends to lean more to the recreational cannabis use, which is illegal in Oklahoma.

They also consider whether the dispensary has a “bud tender” who is knowledgeable about medical marijuana.

Jennifer said they will often offer dispensary staff advice and many of the employees and managers are receptive.

“We rely on aesthetics and relationships. We don’t discount anyone because we believe anyone can change,” she said. “We want every dispensary in Oklahoma to be successful.”

Branching out through Oklahoma

Nowadays, the Hawkinses are in much demand.

Jennifer, who describes herself as a patient advocate, is on the Oklahoma Medical Marijuana Advisory Council.

They are often invited to speak at meetings and gatherings.

And they attend cannabis conferences and festivals.

Kent said they’ve received some negative feedback for this, but he said there’s a purpose to their presence at such events which aren’t all primarily about medical cannabis.

“My answer is Jesus sat with the prostitute,” he said. “You can’t save the world if you’re in your own little church.”

Though they are busy, they still find time to walk a hesitant person through the doors of a dispensary. The couple once relied on volunteers for such tours but they now have a small staff.

Jennifer said she can still remember an older woman who she helped connect to a dispensary that met the criteria of their consulting. It was gratifying to hear later that the woman was enjoying gardening and other activities again because she had been able to find medical cannabis to treat her ailment.

Jennifer said there will be a need for Hawkeye Consulting as long as people continue to struggle with their “spirituality and their medication.”

This article originally appeared on Oklahoman: Preacher and wife push back at stigma surrounding medical marijuana