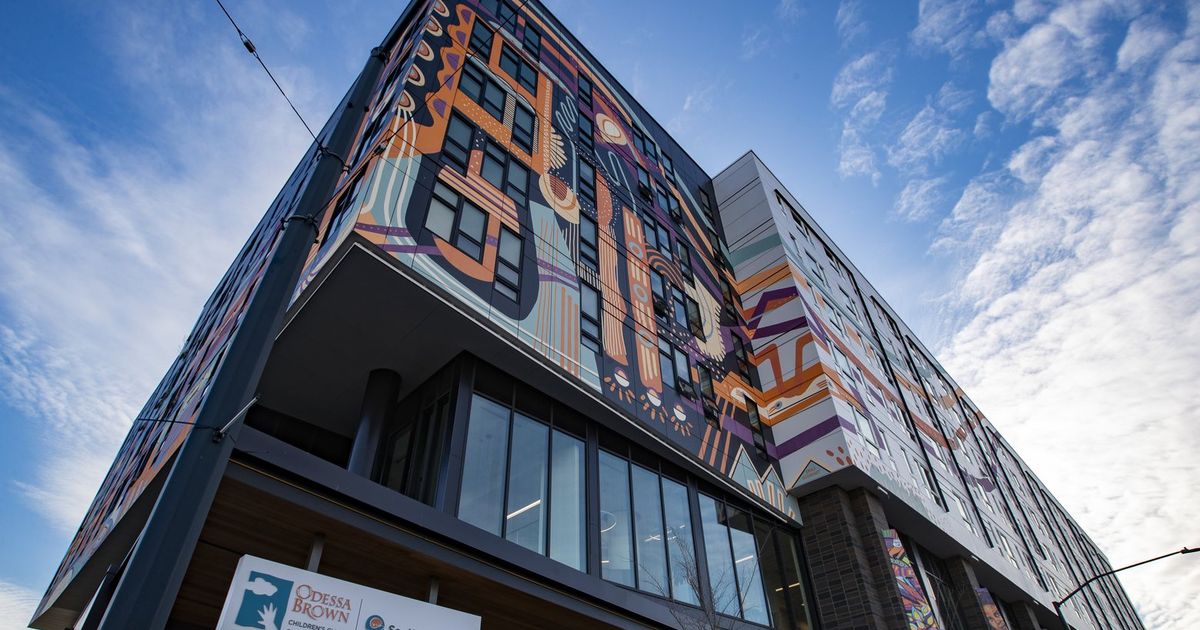 The project began with a vision for expanding one of Seattle’s oldest pediatric health clinics. But when the first patients start arriving next week, they’ll be walking into a full community center.

Inside the new second location of Odessa Brown Children’s Clinic — a Seattle Children’s clinic that’s served patients in the Central District since 1970 — families might be surprised to see resources and activities not normally found at a doctor’s office: a basketball hoop, a small library, a community kitchen for family cooking classes and nutrition lessons, a resource space with computers and printers.

Local art splashes color and life onto nearly every wall, honoring artists from the area and prominent figures from the clinic’s history.

The 42,000-square-foot site sits near the heart of Rainier Valley, a block from the Othello light rail station and at the center of Othello Square. The mixed-use housing development is transforming the long-vacant piece of land at the corner of South Othello Street and Martin Luther King Way South into a space for a public charter school, hundreds of units of affordable co-op housing and apartments, and local businesses and nonprofits.

Doors will open to the clinic’s first patients, those in need of rehabilitation services, March 7. Behavioral health services will become available a few days later, and remaining medical and sports medicine services will open the following week.

The project has been in the works for years. Seattle Children’s announced plans for the second location in 2018, citing a desire to be closer to the 75% of patients and families who had moved farther south in search of more affordable housing.

“We heard the community when they told us it was too hard for them to get to our Yesler clinic,” Dr. Ben Danielson, Odessa Brown’s former senior medical director, said in a statement at the time in 2018. “We’ve listened, and now we’re responding by meeting our families where they are.”

The original site, which will soon be renovated, will continue to serve patients out of the Central District.

Children’s used $52 million from a massive fundraising campaign to help pay for the new building, according to hospital spokesperson Jeanine Takala. In addition, the hospital’s board of trustees approved a long-term plan that includes $37.5 million in operational funds and a $125 million endowment.

On a recent weekday, Antwanette Lyons, the clinic’s community health advocacy manager, led a tour of the new space.

“We’re here to serve,” Lyons said. “And we’re looking forward to it.”

Steps away from the lobby, a dental clinic will welcome patients and draw them into a large, open space with paintings of shooting stars and sea turtles on the ceiling.

Around the corner, you’re stopped by a colorful abstract scene, painted by local artist Ari Glass, who grew up in Rainier Valley. In his mural, called “Path to the Golden Age,” elephants, lions, birds and other animals gather under a blue tessellated sky.

“I wanted to bring them all here, like we’re all coming together,” said Glass, 33. “This is our little paradise section. I wanted to create this spirit of well-being and community.”

A wide staircase brings patients up to what clinic leaders are calling their town square, a main waiting room for medical care, behavioral health appointments, nutrition and lactation, and rehabilitation and sports therapy.

A portrait of Dr. Blanche Lavizzo, the first Black female pediatrician in the state and the clinic’s first medical director, meets families at the top of the stairs. Lavizzo also coined the clinic’s motto, “Quality care with dignity.“

Another hall features the faces of other clinic leaders, including clinic namesake Odessa Brown; Dr. Maxine Hays, another former medical director; and Marilyn Wilkens, who with her husband Lenny Wilkens raised millions of dollars for the clinic’s Central District location.

“Without these foundational folks, this clinic would not be here,” Lyons said.

The large, open town square connects services on the rest of the second floor, all part of the clinic’s vision for an integrated model of equitable care, Lyons said. Behavioral health rooms, for example, are on the same hallways as general exam rooms to reduce barriers to receiving care.

“There is a stigma associated with clinics where you come in and know you go left for behavioral health or right for medical care,” Lyons said. This way, she said, all patients go to the same area regardless of what type of care they need.

Down another hall is a gym for physical, occupational and sports therapy — complete with an elliptical, treadmill, free weights and other workout machines — all additional services Odessa Brown is offering for the first time.

“It’s a little bit of everything,” Bell said.

Finishing touches are still in the works, and an ongoing hiring process is underway for additional dentists, nurses and other medical assistants, but staffers are already thrilled to see the new space, senior medical director Bell said.

Information from The Seattle Times archives was included.