LeBron James Discusses Knee Injury; Reiterates He Will Play In 2021-22 For As Long As Feels Healthy 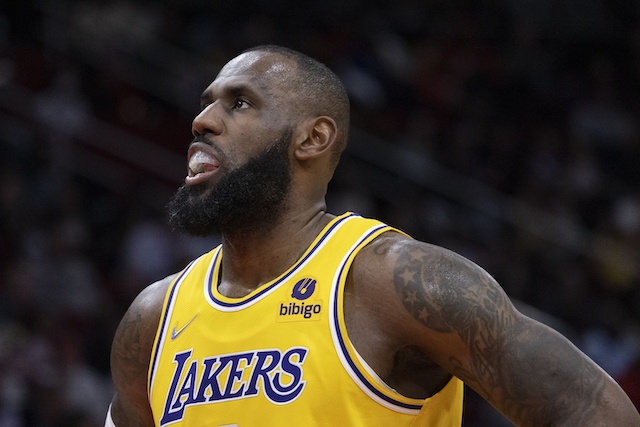 LeBron James returned to the Los Angeles Lakers’ lineup on Wednesday, but it didn’t prevent L.A. from suffering an overtime loss to one of the worst teams in the NBA this season.

The Lakers couldn’t stop the red-hot Rockets offense, allowing it to shoot 51% from the field and 42.5% from beyond the arc. Six different players ended up in double-digits on Houston’s side with rookie Jalen Green leading the way, scoring a game-high 32 points.

James did what he could to secure a win for the Lakers, putting up his fifth triple-double of the season. The four-time NBA champion ended the night with 23 points, 14 rebounds, and 12 assists, playing the majority of the game as the Lakers’ center and 45 minutes overall.

James’ all-around performance came after knee soreness ruled him out of the seven-point loss to the San Antonio Spurs earlier this week. The 37-year-old All-Star suggested his absence — and the quick return — might have had something to do with air travel to Texas for the two road games.

“We had a delay. We had a two-hour delay leaving L.A. on [Sunday],” James said. “I think the flight is what got the best of the knee. Tried to warm it up Monday for Monday’s game.

James reiterated his desire to play the season out despite the lingering knee issues — and regardless of the Lakers’ position in the standings.

“My love for the game and the way I play the game and me suiting up has nothing to do with records and things of that nature. It’s just not me.”

Russell Westbrook said the Lakers have to deal with whatever hurdle is thrown at them. However, he pointed out L.A. has been unlucky this season when it comes to injuries, as it often lost one of the key players when seemingly starting to turn things around.

“I feel like every time we win and get some momentum, something happens,” Westbrook said.

“It’s been like that, I think we had a good game in Brooklyn or something and then Bron was out, and with AD, something happened after that and then he was out. When we play a good game, something always happens but that’s just how it’s been for us.”

Have you subscribed to our YouTube channel? It’s the best way to watch player interviews, exclusive coverage from events, participate in live shows, and more!