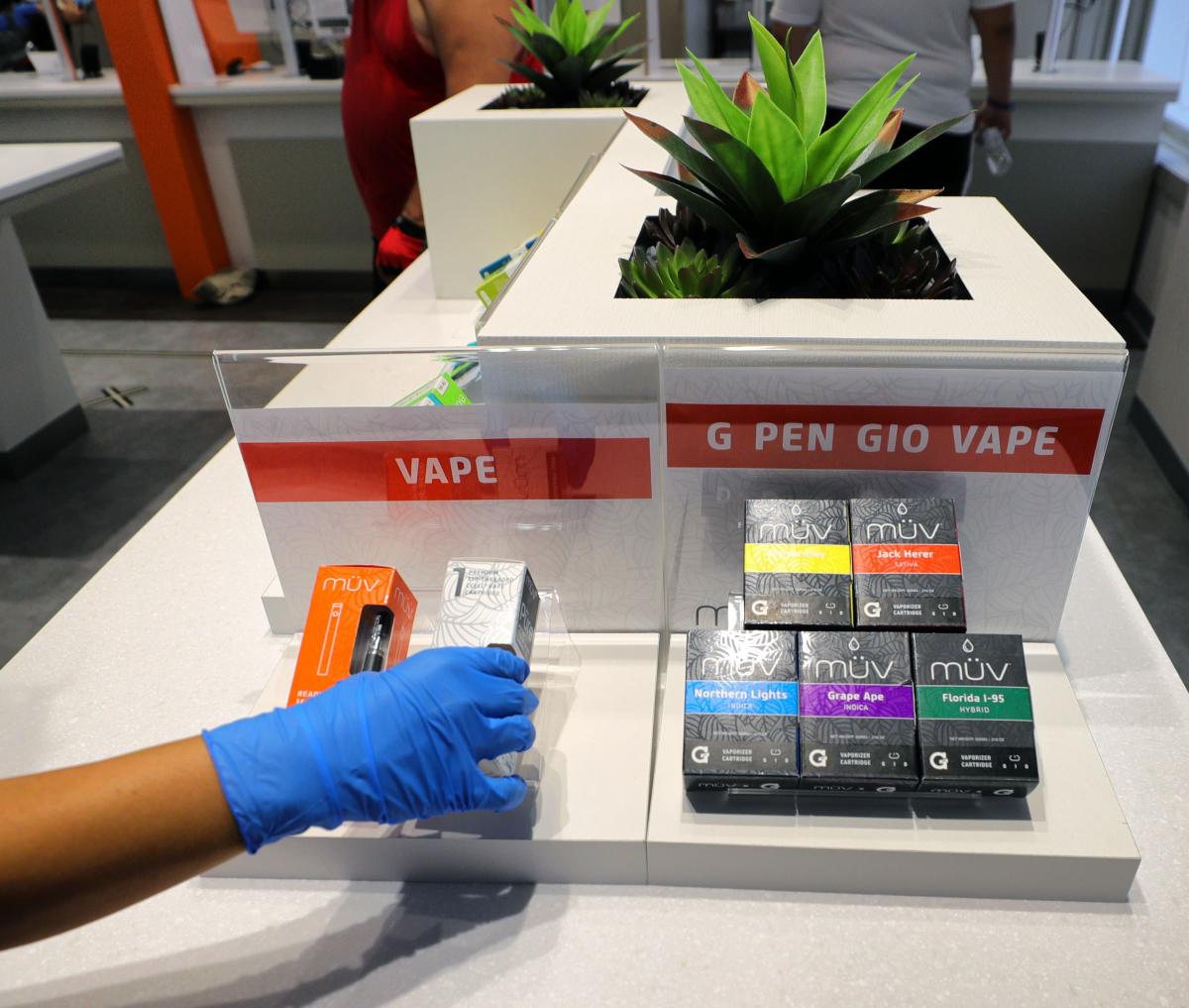 The pandemic has triggered a medical marijuana boon in Florida.

Over the past two years, the number of people with medical marijuana cards has more than doubled, hundreds more doctors have become licensed to qualify patients, new dispensaries have opened almost weekly and a wide variety of new products have become available.

With anxiety levels rising and chronic health conditions deepening during the numerous COVID-19 waves, more Floridians are seeking cannabis as a medical treatment and the industry has found a way to get it to them.

“We have a lot more people coming in and asking for medical marijuana, but I am also seeing an uptick in the severity of underlying problems,” said Dr. Paul Weisman, who operates ZC Concierge Cannabis Centers in South Florida. “People have a lot of disabling anxiety right now, a lot of severe sleep disturbance from their anxiety and a lot of chronic pain for conditions that weren’t treated during the pandemic.”

“Cannabis is one of the few industries in the world that grew during the pandemic. Home deliveries and the fact that it was declared essential in the U.S. really helped, but deep down people were looking for something to deal with stress,” he said.

Hasse, managing director at Benzinga, a digital business platform that covers all things cannabis, said in Florida, supply and demand grew simultaneously, with more doctors recommending it to patients and more stores opening to make it accessible.

“The average age of medical cannabis patients [in Florida] is 55 years old so here are a lot of people who are replacing their traditional pharma medications with cannabis,” Hasse said. “So now you have operators opening stores trying to deliver this service to the community.”

“There’s still a lot of underserved population in Florida and that is what’s interesting about the Florida market,” he said.

22 operators control it all

Only 22 companies are licensed to grow and sell medical marijuana products in Florida. They operate a total of 420 dispensing locations, known as medical marijuana treatment centers, and have big plans for more.

In Florida, all operators must own and control the growing, manufacturing and retail sectors of their business, a format known as vertical integration.

Operators say the pandemic became a breakout moment for cannabis in the state. COVID-19 restrictions implemented in 2020 went into place only about eight months after Gov. Ron DeSantis made smokable pot legal in Florida for medical use. With demand for the flower just beginning to pick up, and COVID-19 restrictions exacerbating medical conditions, sellers reacted fast — filling online orders, opening drive-throughs, and offering curbside pickup and delivery.

Trulieve, the operator with the most medical dispensaries in the state, has 114 locations in Florida — four alone have opened in 2022 (Zypherhills, Fort Myers, Boca Raton, Riverview).

Trulieve also announced two partnerships so far in 2022 to bring new brands of cannabis into the state. Trulieve has 600 different products for sale in its dispensaries that resemble high-end jewelry stores.

By continuing to open new locations and offer more products, he sees the patient population rising much higher than the 710,000 people in the Medical Marijuana Use Registry.

“My goal is to get to the patient population in Florida to 1 million patients. I do expect that to happen, hopefully by the end of next year,” Alfaro said.

Curaleaf, the second-largest operator in the state, has 45 dispensaries in Florida.

“We are very focused on continuing to expand into the Florida market,” said Matt Darin, U.S. President of Curaleaf. “It’s an exciting market and it still has a lot of runway for growth, you know in the medical market alone. We will continue to open new dispensaries. … We’ve recently opened in a bunch of new communities, and we’ve got a bunch more opening here soon.”

This year, medical marijuana sales in Florida are projected to reach between $1.3 billion and $1.5 billion, according to the MJBIZ Factbook, an industry publication.

In Florida, along with pandemic-related anxiety, patients are using marijuana primarily to deal with chronic pain from arthritis, nerve damage, cancer, or conditions such as multiple sclerosis, Parkinson’s, Alzheimer’s, and amyotrophic lateral sclerosis, or Lou Gehrig’s disease.

Even as the industry flourishes, a consortium of nine universities in Florida, is researching how marijuana works as a medical treatment — whether it is effective and safe and the risk/benefit is favorable.

“There’s anecdotal evidence … people describe that it might help them, but most studies lack a control group,” said Almut Winterstein, who co-leads the state’s Consortium for Medical Marijana Outcomes Research. “It’s hard to figure out what would have happened if these patients hadn’t used medical marijuana and would they potentially have had improved symptoms.”

Winterstein, chair of the department of pharmaceutical outcomes and policies at UF’s College of Pharmacy, says there is some evidence it works for some forms of pain and some forms of epilepsy but no one has studied how it might interact with prescription medications.

“There’s a lot to learn,” she said. “We are not talking about prescription medications that go through a very stringent approval process by the FDA and that receive a lot of safety monitoring symptoms, we are talking about something that’s by far not as regulated.”

Winterstein said the consortium plans to mine the state medical marijuana registry to learn whether cardholders who get approved to use it for certain health conditions still end up hospitalized or vising the ER for those conditions.

They will compare it with a control group of people with those conditions who don’t use medical marijuana.

Stephen Buckley, 75, of Hollywood, smokes marijuana every evening for pain and anxiety. “It helps me get to sleep and stay asleep,” he said.

While Buckley endorses the medicinal properties, he says he resents the ongoing cost of getting a recommendation from a doctor. Florida now requires patients to visit their doctors every 210 days or seven months. Most doctors charge from $150 to $250 for that service. The costs can add up and neither doctor visits or purchases are covered by insurance.

“The doctors are all trying to capture you into their fold,” Buckley says.

More than 2,400 doctors qualify in Florida to order medical marijuana and low-THC cannabis for patients.

Some specialize solely in qualifying medical marijuana patients, while others such as neurologists and psychiatrists have tacked it on to their practices.

The number of physicians giving patients recommendations has fluctuated but what has changed significantly is the amount of medical marijuana (mgs THC) being recommended and dispensed. State records show the amount has increased 370% over the past 2½ years.

Weisman, a former emergency physician who operates Concierge Cannabis Centers in South Florida, said patients come in asking for cannabis but need a lot of education.

“There are always physicians that are adding it onto their practice but it’s not for everybody,” he said. “It takes time to speak with a marijuana patient and follow up.”

Florida Agriculture Commissioner Nikki Fried, a proponent of medical marijuana, said she expects the pandemic boon for the industry to continue.

However, she wants to see smaller companies allowed to contract for certain functions that the large operators now control. She believes the change would eventually make the products less expensive for Floridians, particularly the seniors.

“More competition is going to drive down costs,” Fried said. “When you have more competition, it gives more options and dispensaries have to step up their game. You would get a better quality product if there were more players in the industry and it would reduce the cost overall to the patients.”

Efforts are underway in Florida to get more minority involvement. One operator’s license is guaranteed to go to a Black farmer and applications were accepted in late March.

Curaleaf’s Darin said his company is investing in Florida, regardless of whether competition increases.

“We need to continue to be more accessible throughout the state,” he said. “As awareness builds, and with more people getting exposed to the benefits from family and friends, cannabis just has great potential.”