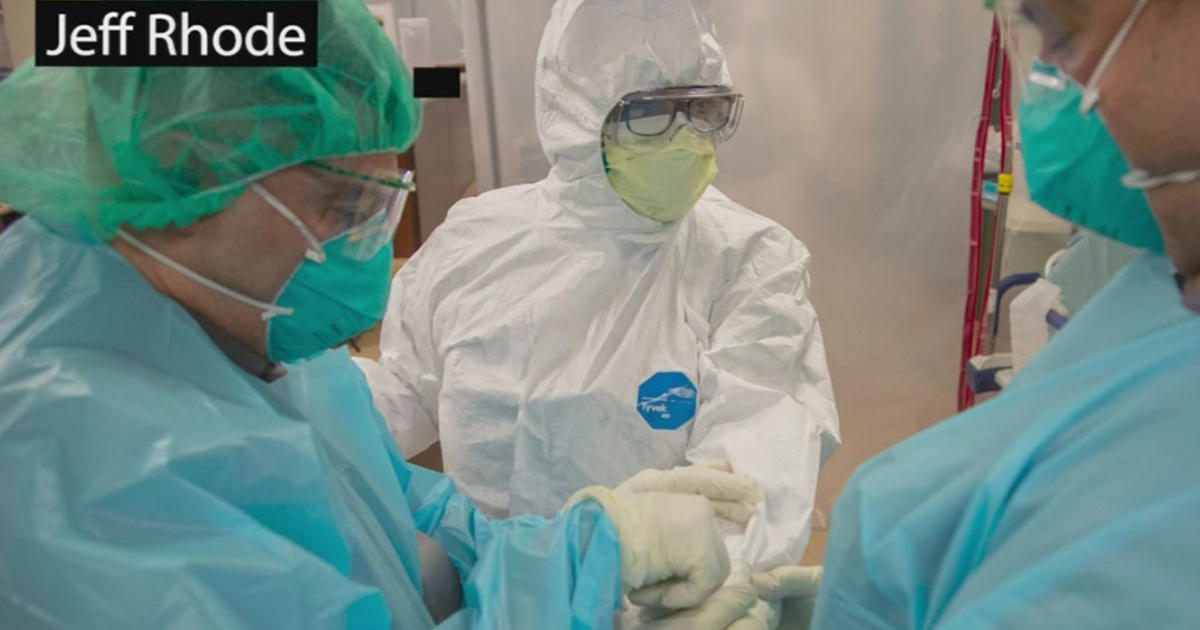 TEANECK, N.J. – Holy Name Medical Center in Teaneck was once the epicenter of COVID-19 in New Jersey.

The hospital transformed itself to accommodate hundreds of patients, turning no one away.

CBS2’s Alice Gainer sat down with staff, including the photographer who documented all of it. He showed the world what the pandemic looked like from the front lines.

Standing in one of the temporary ICUs that was built for patients during COVID, multimedia specialist Jeff Rhode said, “It’s tough to look at the room and not remember what it looked like before.”

During the height of the pandemic, every patient was intubated. Rhode was there and captured among the only unfiltered glimpses available into what hospitals in the Tri-State Area were dealing with.

Doctors and nurses were working around the clock. Rhode himself was pulling 17-hour days seven days a week to document.

“It wouldn’t be unusual to see that someone had just passed away,” he said.

Sometimes, that someone was a relative or colleague.

“I had my mom here and she passed away here,” Rhode said.

Despite personal tragedies, everyone kept going, pausing only to pay their respects before having to move on to the next patient.

Looking back at his photos and videos, Rhode reflected on a particularly difficult day.

“That was a patient transporter named Jesus and his director was taking Jesus to the morgue after he passed away, and coworkers had lined up to honor him and started to applaud as he was going down the hall and it was incredibly sad,” he said.

If you ask Rhode what images he thinks about most today, it’s photos of nurses surrounding a man about to pass away.

“They were holding his hands and they were talking to him and they were FaceTiming with his caregiver at home, and it really was a touching moment,” he said.

Through all of the immeasurable sadness and loss, there were some signs of hope.

“There was a gentleman who was intubated for several weeks, and when he was extubated, he lost a sense of time,” said Michele Acito, executive vice president and chief nursing officer. “His first response was, I need a phone to call my boss, thinking I didn’t go to work. We told him, no, you need to call your wife because you’ve been here for several weeks.”

She added, “It was overwhelming. It truly was like a tsunami.”

In just five days, they added 100 beds and created five temporary ICUs. Staff pitched in to hammer and drill. Sometimes they had up to 250 COVID-19 patients.

Silver tubes attached to patient windows made every room a zero-pressure room.

Armed with the knowledge gained during that time, the hospital now has a brand new, permanent, state-of-the-art ICU.

There’s a touchless door and windows that shade with the wave of a hand.

“We built these cubbies so that the equipment can be passed in and out here without having to expose the staff,” Acito said. “What we learned during COVID was that the less we need to touch the better off we are.”

Though the hospital is back to pre-pandemic business these days, there’s a physical reminder in one hallway — a series of photos called “Faces of the Frontline.”

“Everyone was exhausted. I think you can really see that in their eyes,” Rhode said.

All have stories to tell, those who lived it and lived through it, and never forgotten, those who did not.

Currently, Holy Name has five COVID-19 patients. They all came in for other reasons, but received a positive test at hospital.

They’re leaving up the temporary ICU for a few more months just in case.

Alice Gainer joined CBS2 as a reporter and anchor in January 2013. She covers breaking, feature and general assignment stories.